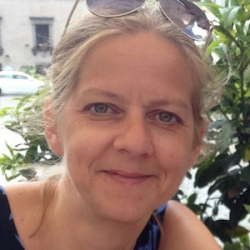 Use the Calendly link to book

I am a bioarchaeologist who joined the Department of Anthropology at San Francisco State in 2007. I earned my doctorate at Cornell University, worked as a contract osteologist for the Repatriation Osteology Laboratory at the Smithsonian Institution, and was adjunct faculty in the Anthropology Department of University of Maryland, College Park before coming to San Francisco State. I currently teach courses in Bioarchaeology, Primate Behavior, Paleopathology, Anthropological Statistics and Human Biological variation.

Beginning with my doctoral work, I have done research on bony changes in the skeleton as a response to physical stress with specific interests in the changes that occur at points (entheses) where muscles and ligaments attach to bone. Studies of the pattern and severity of these changes at specific locations on the skeleton have been used to help reconstruct the labor patterns that were part of the daily lives of ancient and prehistoric people. With Luigi Capasso and Kenneth A.R. Kennedy, I co-authored a standard atlas that documents various signs of physical stress in the skeleton. In addition, I worked with Dr. Michael Blakey and other collaborators on the analysis of indicators of labor stress at the African Burial Ground Project in New York City. The Burial Ground Project analyzed an 18th century cemetery, which is the earliest and largest group of Africans and African descendents that has been excavated in the United States. Through my contract work at the Smithsonian, I also became interested in paleopathogy and have several on-going research projects related to lesions of the eye orbit, developmental anomalies, and diseases of bone formation. Our lab at SF State is also available for forensic cases. In the past we served as consultants for the Sonoma County Sheriff’s Department and we were part of a team from SF State and CSU Chico that assisted in recovery efforts for San Bruno County after a gas explosion and fire that destroyed several blocks of homes in September of 2010.

I have been centrally involved in a project with bioarchaeologists from around the country that has made a graphic interface and relational database available to researchers for use in documenting, storing, and managing biological information collected from human skeletal remains. The software and supporting documentation is distributed for free to researchers through a website hosted by the Smithsonian Institution with additional funds from the National Park Service. The software was originally programmed by my colleague, Dr. Stephen Ousley, and I am part of the team of osteologists who refined the methods of data collection, worked on web content as well as authoring and editing of the program manuals.

I am part of an international working group (including participants from Italy, France, Great Britain, and Austria) dedicated to reevaluating the theoretical and methodological issues involved in the analysis of entheseal changes. The group is producing standards for the description and analysis of entheses that will facilitate comparisons of data across sample populations and studies. Formed in Coimba, Portugal in 2008, we convened in Geneva during the Summer of 2010 to test the methodologies. Preliminary recommendations were presented to the European Pathology Association in Vienna, a symposium for the American Association of Physical Anthropology in Portland, and in Henderson et al. (2013). We will be meeting again for a workshop in Coimbra during the summer of 2013 to further refine and expand the methods with financial support from the Wenner-Gren Foundation.

2012, Wilczak CA and DW Mulhern. Co-occurrence of DISH and HFI in the Terry Collection.International Journal of Osteoarchaeology. 22:452-459.